Ramirez Arbitration & Mediation Services: Since leaving the federal bench in 1990, I have specialized in the resolution of legal disputes with primary focus on the mediation/settlement of the following: employment claims (wrongful termination, sex, race, age and handicap discrimination); civil rights disputes; personal injury and wrongful death claims and complex business/commercial disputes.

Extensive representation of clients in the areas of tort litigation and defense of major crimes, both at the state and federal court levels. During this period, had cause to successfully represent clients before the state courts of appeal and the California Supreme Court. During the course of my experience as a civil litigator, jurist, and private judge, I had cause to try or otherwise preside over 3000 or more jury trials, settlement conferences and/or mediations.

Have lectured extensively on the subjects of trial practice and procedure for the California Continuing Education of the Bar, local and federal bar associations, trial lawyer associations, and various law schools including The University of the Pacific, McGeorge School of Law, The University of California at Davis, Martin Luther King Law School, and Northwestern School of Law, Sacramento. Among the more notable lectures are the following: 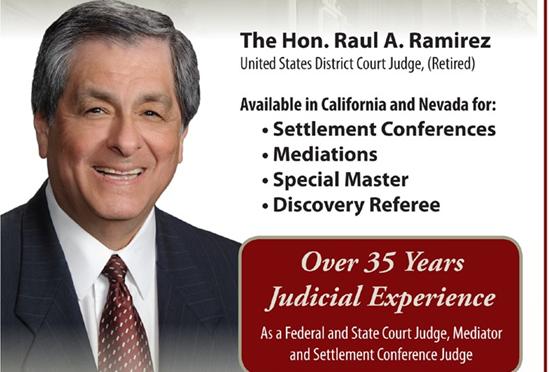